Scores as they happened here

Dubai: There was no twist in the script as New Zealand beat Scotland by 16 runs to take a firm step towards the semi-finals in the afternoon game of the day. All eyes will now be on the high stakes evening game of Group 2 where India take on Afghanistan in Abu Dhabi.
Scots, who had qualified by topping their group, did not look overawed to take on one of the title-contenders to finish at 156 for five while chasing a par score of 173 for an improbable win. Michael Leask, coming in at number six, struck a few lusty blows to score 42 off 20 balls against a quality attack comprising of Trent Boult, Tim Southee and Mitchell Santner.
The Kiwis had earlier rallied around senior opener Martin Guptill's innings of 93 to finish at a potentially match-winning total of 172/5 after being sent into bat by Scotland.

No twist in the script as New Zealand beat Scotland by 16 runs to take a firm step towards the semi-finals. As a qualifying nation, the Scots were not disgraced at all as they end at 156/5.

Boult has come back for his final overs and negotiating him is now at it's toughest. MacLeod fourth wicket to fall as Scotland are 102/4. The earlier NZ can finish this game, the better it is for their run-rate.

The 100-run mark comes up for Scotland after 14 overs. However, with the run-rate at 12.51, Scotland would need something extraordinary and it looks beyond their means now. The match can only tilt one way from here.

It was sheer beauty from Tim Southee as his off cutter gets Cross lose his balance and double up. The wicketkeeper-batter is bowled as it's 76/3. The pressure from now on will be too much on an inexperienced lower order now.

Munsey's wicket has put the brakes on Scotland's run-rate as they are now 76/2 at the halfway mark. It's a tall order to expect the Scots to score 97 off 60 balls from here but they don't look willing to go down without a fight. It's been a good contest so far.

Williamson brings on Sodhi to apply the brakes but George Munsey goes on his knees to pick him up for a six behind score and then another big one over mid-wicket. Sodhi, however, as the last laugh as Munsey is caught in the deep in the same over. Scotland 66/2 in 8th over.

An extraordinary over for Scotland. Wicketkeeper-batter Mathew Cross begins with a short arm pull off Milne...4,4,4,4,4 to leave the Kiwis deflated. 48/1 after powerplay - that was some controlled aggression.

Scotland lose first wicket as Coetzer, on 17, chips a slower one from the wily Boult to Southee to mid-on. Boult gesture of asking the departing batsman to 'frame the moment' a tad unncessary. Scotland 25/1 now.

A quietly confident beginning by Scotland. The way skipper Coetzer rocked back for a backfoot punch off Boult for four would have any top batter round the proud. 16/0 in second over.

Dubai: New Zealand rallied around senior opener Martin Guptill's innings of 93 to finish at a potentially match-winning total of 172/5 after being sent into bat by Scotland in their day game in Dubai.
Sent into bat by Kyle Coetzer, the Scottish captain who was lucky with th toss, the Scots struck early blows by removing the in-form opener Daryl Mitchell (13) and skipper Kane Williamson (0) in back-to-back deliveries. A 105-run partnership for fourth wicket between Guptill and Glenn Phillips (33) took the favourites to a comfortable position.
For Scotland, seamers Shafyan Sharif (2/28) and Brad Wheal (2/40) impressed with their control and change of pace.

NZ rally around senior opener Guptill's innings of 93 to end at 172/5 after being sent into bat by Scotland. The qualifiers were upto the task with Sharif and Brad Wheal showing fine control against quality batters.

New Zealand reach 150/3 and with three overs still to go, they are likely to stretch it to 180-plus. Scotland will be ruing a dropped chance from Phillips.

A handy 33 by Phillips as he is finally caught on the cow corner off Wheal. NZ, however, are comfortable at 157/4.

New Zealand reach 150/3 and with three overs still to go, they are likely to stretch it to 180-plus. Scotland will be ruing a dropped chance from Phillips.

An unhurried approach by NZ as they know anything more than 140 should see them through with the quality of their attack. Glenn Phillips, their wicketkeeper-batsman, finds his arc against part-timer Michael Leask for a timely six. 84/3 in 12th over.

Scotland strike again soon after powerplay as Devon Conway tries a reverse sweep off spinner Mark Watt and is caught behind. Fine job by the unheralded Scot attack as NZ are 52/3. Guptill, however, is still around.

Now, now...Sharif removes Williamson (0) as he gets a faint nick to a one going down the leg side and is caught behind. A big wicket this as Kiwis are at 35/2.

Guptill eases into an extra cover drive off Brad Wheal as action begins in an empty stadium. Kiwis are 13/0 after first over. 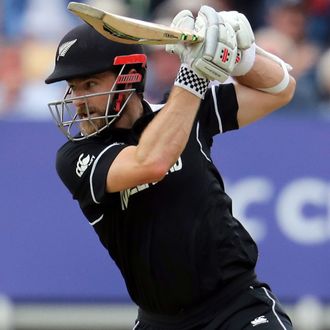 Dubai: New Zealand, upbeat after their emphatic win against India, will start overwhelming favourites against qualifiers Scotland when they square off in a day game of Super-12 stage of ICC T20 World Cup in Dubai on Wednesday.

Shrugging off a five-wicket defeat against Pakistan in their Group 2 opener, Kane Williamson’s men held their nerves and executed their gameplan to perfection to shut out a star-studded India by eight wickets at the same venue. Their win, alongwith Afghanistan’s superior run-rate which now sees them occupying second spot in the table, has thrown open the race for the second team from the group after Pakistan to make the semi-finals.
Scotland, meanwhile, had looked out of depth in their two Super-12 matches so far after playing some smart cricket in the qualifiers. They have some quality performers in their ranks in George Munsey and Chris Greaves, but it’s difficult to seem them punch above their weight against one of the title-contenders.

IPL retention: Tough decisions have to be made