DUBAI: Apple announced four iPhone 12 models and two iPhone 12 minis, all of which are 5G-capable. The iPhone 12 and iPhone 12 mini comes in a  new design packed with features, including A14 Bionic, an advanced dual-camera system, and a Super Retina XDR display with the Ceramic Shield front cover.

The 5G feature ushers in a new era for the world’s most coveted smartphones. The newly-designed iPhone 12 models feature edge-to-edge Super Retina XDR displays for a brighter, more immersive viewing experience, and a new Ceramic Shield front cover, providing the biggest jump in durability ever on iPhone.

The A14 Bionic, the fastest chip in a smartphone, powers every experience on iPhone 12, and coupled with an advanced dual-camera system, delivers meaningful new "computational photography" features, with what Apple says is the highest quality video in a smartphone. iPhone 12 models also introduce MagSafe, offering high-powered wireless charging and an all-new ecosystem of accessories that easily attach to iPhone. iPhone 12 and iPhone 12 mini will be available in five aluminum finishes — including blue, green, black, white, and red.

New system for optical image stabilisation. Sensor-shift approach. Stabilises the sensor rather than the lens. This gives it 87% improvement in low light. The new wide sensor is 47% larger with 1.7 micron pixels. Showing a film with a professional cinematographer talking about how the "next great film director is already making movies" with an iPhone. iPhone 12 Pro can edit direct in Dolby Vision. HDR video recording is coming to iPhone. Record in 10-bit HDR, 700 million colors or 60x more colors than before. 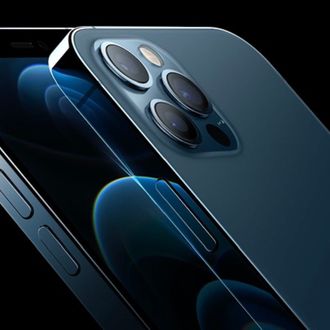 There's a big environmental news for the iPhone. Apple is "carbon neutral" for global operations. Offices, data centers, retail stores. By 2030, Apple wants to have net zero climate impact including manufacturing supply chain and product life cycles. This will be using renewable and recycle materials, including recycle rare earth magnets.

Apple announced the Apple A14 Bionic for the iPhone 12. It's a 64-bit ARM-based system on a chip, designed by Apple Inc. It appears in the fourth generation iPad Air. Apple states that the CPU performs up to 40% faster than the A12, while the GPU is up to 30% faster than the A12.

5G just got real for Apple, with iPhone 12

Apple has unveiled its long-awaited iPhone 12. By doing so, the company will enter the 5G era. It promises 4Gbps connection, and and 200 Mbps peak upload speeds. 5G capability comes with the entire line up of iPhone unveiled on October 13, according to Apple CEO Tim Cook.

Pack the power of computational audio, and a central device to control a smart home. Can broadcast audio messages through the house, and through iPhone, iPad, Apple Watch, and CarPlay.

The California-based company is expected to announce an iPhone 12 that could tap into faster 5G networks. It's a new feature designed to bump sales during the company's busiest sales quarter. Will Apple deliver on this promise?

Keep refreshing this page for the latest updates. The event is nearly one month later than normal — and comes as the pandemic has disrupted Apple's rhythm for designing and churning out its biggest-selling product.

Today (tonight from 9pm in Dubai, October 13, 2020) the iPhone 12 range is widely expected. As usual, the company is hosting the pandemic-era virtual event. And as usual, no confirmation from Apple either about any of the supposed leaks. But the rumour mill has it that the handsets will be launched.

Leaks about of what's reportedly going to be announced. First, the number of phones to be announced: four. That's according to one remarkable leaker, Evan Blass. He has posted what appear to be official Apple renders for all four new iPhone 12 models.

He claims (similar with the various rumours) the new models will be called the following:

Again, nothing's confimed — that is from about 9pm Dubai time (10am in California). The supposed renders only show off the fronts and backs of the devices. There's no clear view of the new squared-off sides, which are supposed to resemble the iPhone 4 design, according to the most popular leakers. But the images do give a good idea of what to expect from the unveil.

Several details about the upcoming phones had been shown: the new blue color on the iPhone 12 Pro and 12 Pro Max (replacing last year’s “midnight green” hue). Dark gray, white, and gold color options are also set to return. The pictures also give the best look yet at the new LIDAR sensor that will be featured on both devices. (It’s the dark circle underneath the right camera.)

The latest leak prices the four models a bit differently, putting the iPhone 12 Mini at $699. We'll confirm this for you.