Gulf News experts joined hands with readers Amarpreet Singh and Hussain Yousuf, diehard fans of Chennai Super Kings and Royal Challengers Bangalore, respectively, to take you through a clinical Chennai win in the first match in Sharjah of IPL 2021 in UAE

Sharjah: Chennai produced a clinical performance to outplay Royal Challengers Bangalore by six wickets to move closer to the play-off spot in the Indian Premier League on Friday.

After letting the RCB openers Virat Kohli and Devdutt Padikkal got off to a flier, the Yellow brigade pegged back Royal Challengers in the last 10 overs and never let the grip off their throats to win the match by six wickets.

Captain Kohli and Padikkal scored half-centuries to give the Bangalore team a brisk start in a match delayed by desert storm.

At the toss, Mahendra Singh Dhoni said: “It’s a small ground and we would like to chase,” hoping that Chennai will be facing a big target. However, that was not to be as Royal Challengers lost their way towards the end of the innings when five wickets fell for the addition of 16 runs.

Chasing a modest target of under eight an over, Super Kings did not show any hurry to knock off the required runs. Rituraj Gaikwad once again showed that he can take the burden on his young shoulders. A stunning catch by Kohli ended his stay while Faf du Plessis also followed in the next over for 38 and 31, respectively.

The victory has taken CSK to the top of the standings with 14 points, same as Delhi Capitals, but have a better run rate. 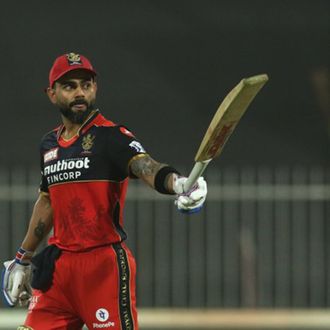 Sharjah: Chennai Super Kings pegged back Royal Challengers Bangalore in the last 10 overs of Match 35 in the Indian Premier League at the Sharjah Stadium as Virat Kohli's men finished at 156 for six.

Put in to bat, Royal Challengers were given a brisk start in a match that was delayed by a desert storm. Virat Kohli and Devdutt Padikkal were given easy gifts that they feasted on take the score to 55 at the end of the powerplay and 100 in 11.1 overs.

The exit of Kohli (53 off 41 balls) in the 14th over gave Super Kings the much-needed opening, which they capitalised on to reduce Royal Challengers to 156 for six after losing five wickets for the addition of 14 runs.

The chase could be tricky for Chennai as the old ball doesn’t come on to the bat as well as when it’s new. So the first 10 overs will set the trend for Chennai’s chase.

However, the odds are not in favour of RCB. In the head-to-head record against Chennai, Bangalore have nine wins, 17 loses and one no result in 27 clashes so far. In the first round of the season 14 at Narendra Modi Stadium in Ahmedabad, Chennai eased to a 34-run win over Bangalore.

Bangalore will have to pull all their resources together to give themselves a confidence boost after the disappointing performance against Kolkata Knight Riders in Abu Dhabi. It’s a new day, new wicket, new venue and a new pitch.

MORE ON IPL IN UAE

However, that’s not going to be easy as Chennai are riding high with a stunning comeback win against defending champions Mumbai. Though the win gave Super Kings the a right start in the second leg, the form of Suresh Raina must be a cause for worry.

Bangalore have the firepower to turn the tide. But can they do it today?