Pakistan took on New Zealand in their T20 World Cup clash in Sharjah. Follow all the coverage and updates here.

Live scores as they happened here.

This is only the second time that Pakistan have won back-to-back T20 World Cup matches. Sharjah erupts into celebration. Pakistan chase down the target in 19th over. The experience of Shoaib Malik and an explosive Asif Ali win it for Pakistan with a superb sixth-wicket partnership.

Pakistan win by 5 wickets. What a match!

Great come back by Pakistan batters Asif Ali and Malik. 9 required in 12 balls. 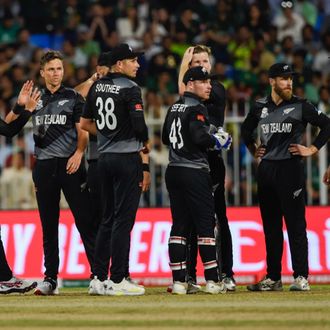 Pakistan lose fifth wicket at 87. Left-handed batter Imad Waseem out lbw while trying to play reverse shot. He is back in the pavilion with 11 runs. Pakistan look in trouble at 87/5. New batter is big hitter Asif Ali.

With Rizwan back in the pavilion at this crucial stage may be the turning point in the match as the Kiwis are very much back in the game and dominating with their tight bowling. Experienced Malik and Imad are at the crease trying to build a partnership. Will they be able to win it for Pakistan is a million dollar question. Pak 75/4 in 13 overs

Big wicket: Rizwan trapped lbw on low delivery by Sodhi. Pakistan in trouble at 69-4 in 11.4 overs.

Out, Stunning catch. Hafeez is out for 11. Went down the wicket and tried to hit big to accelerate the score. Caught at the boundary line by Conway. Shoaib Malik is the new batsman.

At the halfway stage of the second innings, New Zealand have managed to restrict Pakistan to 58 for two. Pakistan need another 77 runs off 60 balls with Rizwan batting at 26 and Mohammad Hafeez showing a great touch.

Hafeez, 41, opens his account with a smashing six over long off from a pitched up delivery from Neesham. Pakistan 55/2 in 9.4 overs.

Sodhi strikes after being hit for a six to dismiss Fakhar Zaman leg before the wicket. The Kiwis referred the decision and the third umpire ruled it out to leave Pakistan at 47 for 2 in 9 overs. New batter is Mohammad Hafeez.

First six of the Pakistan innings hit over long-on by left-hander Fakhar Zaman to Sodhi. Pakistan 47/1 in 8.5 overs

New Zealand bowlers have kept a tight line to keep the Pakistan batters in check. Tim Southee’s big wicket of skipper Babar Azam has given the Kiwis the opening that they were looking for. After seven overs Pakistan are 35 for 1. It’s a wicket where one can’t come and play the shots, now it is time to rotate the strike with ones and twos to keep the scoreboard ticking.

Out: Captian Babar Azam bowled by Southee for just nine runs. Pakistan off to a modest start scoring 28 runs in first five overs. They are a bit more cautious against the superb NZ pace attack lead by Southee and Boult. Rizwan hit three delightful boundaries and batting at 17 now.

Opener Rizwan picks the shorter delivery from the Kiwi pacer Trent Boult early and hits an extraordinary shot for a four. Pakistan 14/0 in three overs.

Pakistan openers Mohammad Rizwan and Captain Babar Azam began the run chase with a cautious start with only seven runs in the first over. Let's see whether the Kiwi bowlers manage to break their partnership early.

Pakistan restricted New Zealand to an under-par 134 for 8 on a new wicket at the Sharjah Stadium today.
One a cool evening, a packed stadium was treated to some close contest between the bat and the ball. The Pakistan bowlers did not give New Zealand batsmen the leeway to go big towards the end, especially Hasan Ali, who bowled the Yorkers at will, including the one that landed on Martin Guptill’s toes earlier in the innings.
Haris Rauf came to the party by getting two quick wickets in the 18th overs. Such was Pakistan’s stranglehold on New Zealand batters, no boundary was scored from the 13th-17th over period, coinciding with the needless dismissal Kane Williamson, who was run out while stealing a non-existent single.T
hough the New Zealanders weathered the early storm of Shaheen Shah Afridi, they were never getting to the grips against a varied attack that was well rotated by skipper Babar Azam.
Rauf finally finished with a four-wicket haul after dismissing Mitchell Santner off the last ball of the innings.
Pakistan should be able to chase the target with plenty to spare.

Out with the final delivery of the innings. Rauf struck again for his fourth wicket of the match. Slower delivery completely deceives Santner and hits the sumps. Rauf leads the bowling with four wicket haul. NZ 134/8 in 20 overs

New Zealand innings crumbles after Conway and Phillips are dismissed in a space of three balls to reduce the Black Caps to 116 for 6 in 17.3 overs. Rauf gets both the wickets.

Glenn Phillips need to live up to his reputation of playing the big shots as New Zealand hit their first boundary after 30 balls. All Blacks are 116 for 4 after 17 overs.

Crowd stood up to welcome Shaheen Afridi who has now been given the bowl to bowl his remaining two overs. Pakistani bowlers are keeping the tempo and are not allowing the Kiwi batters to swing their arms even in the final slog overs

Big wicket: Williamson is run out. Hasan Ali hit the wickets while Williamson was trying to reach the crease after refused single by his partner.

Williamson immediately reviews a lbw decision after trying to reverse sweep Hafeez. The third umpire overrules and declares not out as it hits the glove. The New Zealand skipper celebrates the decision with a four and a one-handed six off the next two balls to increase the tempo. The Black Caps are 75 for 3 after 12 overs.

Jimmy Neesham becomes the third wicket, caught again by Fakhar Zaman for one. Trying to heave the ball to the mid-wicket fence, the left-hander hit straight to Zaman off Hafeez. New Zealand’s plan is simple. Attack from one end while Williamson holds the other. The Black Caps are 56 for 3 after 9.1 overs.

Left-arm spinner Imad frustrated the batter Mitchell who went after him for a second six in a over but was caught at the deep mid-on. Imad completed his brilliant bowling spell of four overs for 24/1. NZ 56/2

Mitchell tried one too many. After hitting a six over long off, he again tried to loft the ball over long-on only to hit is straight to the hands of Zaman. New Zealand are 54 for 2 after 8.2 overs.

After powerplay overs New Zealand are 42 for 1 with Mitchell batting on 19 and Williamson 5. With the field spread now, both batsmen will now be looking to rotate the strike and deal in singles and twos

Right-arm Pakistani pacer Haris Rauf is a fearsome bowler who can shoot a yorker at a pace of 150k/h and can also bowl slower deliveries with less than 80k/h with perfection. He keeps the batter guessing.

Martin Guptill, after being softened up with a stunning yorker on the foot by Haris Rauf, played a wild shot that ricocheted off the pads on to the stumps. While Guptill limped to the pavilion, in comes captain Kane Williamson.

Haris Rauf takes the ball and gave Pakistan the much needed breakthrough. Clean bowled Guptial. NZ 36/1 in sixth over

Daryl Mitchell hits the first six, playing the ball in the air for the first time as the Blacks Caps batsmen are not willing to take undue risk. The plan must be to keep the wickets intact and increase the tempo towards the final half.

Afridi taken off the bowling attack. Right-arm pacer Hasan Ali got hit for the first six of the match.

Afridi finished his second over. He is banging the ball on the ground with speed but he is unable to get the swing at the Sharjah pitch. Got hit for a four on the covers by Mitchell. Afridi gave away only seven runs in his two overs.

This match is being played on a new strip. Pakistani bowlers have not allowed the Kiwis so far to move their arms freely despite the fact the surface in Sharjah might be conducive to big hitting

Pakistani left-arm pacer Shaheen Shah Afridi begins his first over against New Zealand. Can he do it again--taking wicket in the first over the innings? Stay with us to watch. Martin Guptil and Daryl Mtichell open the NZ batting.

New Zealand suffer a big blow before the start of their campaign after Lockie Ferguson has been ruled out of the Twenty20 World Cup with a grade-two tear on the right calf.

Red-hot Pakistan is set to take on New Zealand in the 19th fixture of the T20 World Cup 2021 at Sharjah Cricket Stadium. Pakistan opted to field after winning the toss. Pakistan did not make any change in them for this match

Pakistan won the toss and elected to field against New Zealand.

Sharjah: The buoyant Pakistan team will be eager to get another two points on offer against New Zealand and further cement their position at the top of the Group 2 table. To achieve that, Pakistan skipper Babar Azam will rely heavily on the imposing left-arm pacer Shaheen Shah Afridi, who has made it a habit to give Pakistan an early wicket. Afridi has struck a vital blow by getting a wicket in his first over of a Twenty20 match 22 times. He achieved the same against India on Sunday, which put Virat Kohli’s men on the backfoot straight away and finished with a three-wicket haul. The Pakistan team must be feeling pretty confident after that game with Azam and Mohammad Rizwan among runs in the 10-wicket win.
New Zealand, on the other, must get their team composition right in their first match of this Twenty20 World Cup Super-12 game. Kane Williamson, the shrewd captain, knows how to handle his resources well and use the big-hitters to the best of their abilities. It promises another cracker of a game, now over to Sharjah…